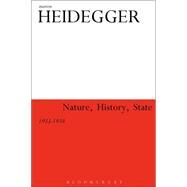 The seminar, which was held while Heidegger was serving as National Socialist rector of the University of Freiburg, represents important evidence of the development of Heidegger's political thought. The text consists of ten 'protocols' on the seminar sessions, composed by students and reviewed by Heidegger. The first session's protocol is a rather personal commentary on the atmosphere in the classroom, but the remainder have every appearance of being faithful transcripts of Heidegger's words, in which he raises a variety of fundamental questions about nature, history and the state. The seminar culminates in an attempt to sketch a political philosophy that supports the 'Führer state'. The text is important evidence for anyone considering the tortured question of Heidegger's Nazism and its connection to his philosophy in general.

Martin Heidegger (1889-1976) is regarded as one of the twentieth century's most important philosophers.