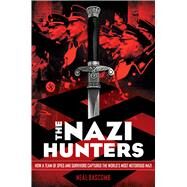 A thrilling spy mission, a moving Holocaust story, and a first-class work of narrative nonfiction.

In 1945, at the end of World War II, Adolf Eichmann, the head of operations for the Nazis' Final Solution, walked into the mountains of Germany and vanished from view. Sixteen years later, an elite team of spies captured him at a bus stop in Argentina and smuggled him to Israel, resulting in one of the century's most important trials -- one that cemented the Holocaust in the public imagination.

This is the thrilling and fascinating story of what happened between these two events. Illustrated with powerful photos throughout, impeccably researched, and told with powerful precision, THE NAZI HUNTERS is a can't-miss work of narrative nonfiction for middle-grade and YA readers.

Neal Bascomb is the author of six nonfiction books for adults on subjects ranging from a 1905 Russian submarine mutiny to a contemporary high school robotics team. The Perfect Mile and Hunting Eichmann went on to be New York Times and international bestsellers. His first book for young adults, The Nazi Hunters, won the YALSA Excellence in Nonfiction Award in 2014, and his second, Sabotage, was called excellent in a starred review from School Library Journal. Neal lives in Seattle with his family. Please visit his website at www.nealbascomb.com and follow him on Twitter at @nealbascomb.
What is included with this book?