The Neoconservatives The Origins of a Movement: With a New Foreword, From Dissent to Political Power 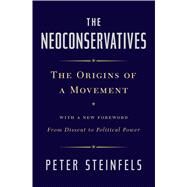 In 1979, Peter Steinfels identified a new movement and predicted it would be the decade’s most enduring legacy to American politics. In a new Introduction he describes its evolution from a reaction to Sixties' social change into an entrenched political force promoting an assertive, even belligerent, foreign policy.

More than three decades ago, in The Neoconservatives, Peter Steinfels described a nascent movement, predicting that it would be the sixties’ “most enduring legacy to American politics.” Now, in a new foreword to that portrait, he traces neoconservatism’s fateful transformation. What was a movement of dissenting intellectuals creating a new, modern kind of conservatism became a phalanx of political insiders urging the nation to flex its muscles overseas.

The Neoconservatives describes the founders of the movement, disenchanted liberals recoiling from the turmoil of the sixties, a decline in authority, and a loss of tough-minded leadership at home and abroad. Written contemporaneously to the birth of a movement that would profoundly mark American history, The Neoconservatives holds clues, Stein­fels argues, to how and why neoconservatism swerved from its original promise even as it successfully implanted itself as an influential and aggressive element in our politics. This is a landmark book, “an important contribution to understanding the influence of ideas on American politics” (Congress Monthly).
Peter Steinfels, former co-director of the Fordham University Center on Religion and Culture, is a university professor at Fordham. He was religion columnist for The New York Times and editor of Commonweal. Steinfels is the author of A People Adrift: The Crisis of the Roman Catholic Church in America (Simon & Schuster, 2003). He lives in New York City.
What is included with this book?