Neutral Milk Hotel's In the Aeroplane Over the Sea 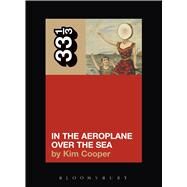 Of all the recordings to emerge from the Athens-via-Denver collective called Elephant 6, Neutral Milk Hotel's second album is the one that has worked its way under the most skins. Magnet magazine named it the best album of the 1990s, and Creative Loafing recently devoted a cover story to one fan's quest to understand why band leader Jeff Mangum dropped out of sight soon after Aeroplane's release. The record sells steadily to an audience that finds it through word of mouth. Weird, beautiful, absorbing, difficult, In The Aeroplane Over the Sea is a surrealist text loosely based on the life, suffering and reincarnation of Anne Frank, with guest appearances from a pair of Siamese twins menaced by the cold and carnivores, a two-headed boy bobbing in a jar, anthropomorphic vegetables and a variety of immature erotic horrors. Mangum sings his dreamlike narratives with a dreamer's intensity, his creaky, off key voice occasionally breaking as he struggles to complete each dense couplet. The music is like nothing else in the 90s indie underground: a psychedelic brass band, its members self-taught, forging polychromatic washes of mood and tribute. The songs stick to one narrow key, the images repeat and circle back, and to listen is to be absorbed into a singular, heart-rending vision.
What is included with this book?