The New Sorrows of Young W. 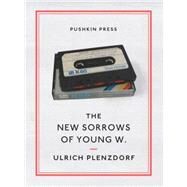 Edgar Wibeau, seventeen years old, has died on Christmas Eve in an unfortunate accident involving electricity. His father, who left the family when Edgard was five, interrogates those close to him, to find out what exactly happened - and who his son really was. Helpfully for the reader, Edgar himself punctuates the father's conversations with his mother, best friend Willi, and Charlie, the woman with whom Edgar was unhappily in love, to give us his version of events from beyond the grave - and a story magically reminiscent of Goethe's The Sorrows of Young Werther and Salinger's The Catcher in the Rye unfolds before our eyes. Originally conceived as a screenplay, Plenzdorf's modern classic was first published in East Germany in 1973. A satire about the cultural and social limits of the GDR, it has long been a set text in German schools, and its critical and popular success remains unabated.
Ulrich Plenzdorf (1934-2007) was an award-winning German author and dramatist. Born in Berlin, he studied Philosophy and Film in Leipzig, achieving fame in the early 1970s with The New Sorrows of Young W. From 2004 onwards, Plenzdorf was a guest lecturer at the German Institute of Literature in Leipzig. He died aged 72 of undisclosed causes.

Translated from the German by Romy Fursland.