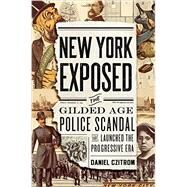 On a Sunday morning in early 1892, Reverend Dr. Charles H. Parkhurst ascended to his pulpit at the Madison Square Presbyterian Church in New York and delivered one of the most explosive sermons in the city's history. Municipal life, he charged, was morally corrupt. Vice was rampant. And the
city's police force and its Tammany Hall politicians were "a lying, perjured, rum-soaked, and libidinous lot." Denounced by city and police officials as a self-righteous "blatherskite," Parkhurst resolved to prove his case. The bespectacled minister descended his pulpit and in disguise visited gin
joints and brothels, taking notes and gathering evidence. Two years later, his findings forced the New York State Senate to investigate the New York Police Department. The Lexow Committee heard testimony from nearly 700 witnesses, who revealed in shocking-and headline-dominating-detail just how
deeply the NYPD was involved in, and benefited from, the vice economy. Parkhurst's campaign had kick-started the Progressive Movement.

New York Exposed offers a narrative history of the first major crusade to clean up Gotham. Daniel Czitrom does full justice to this spellbinding story by telling it within the larger contexts of national politics, poverty, patronage, vote fraud and vote suppression, and police violence. The effort
to root out corrupt cops and crooked politicians morphed into something much more profound: a public reckoning over what New York--and the American city--had become since the Civil War.

Animated by as vivid a cast as New York has ever produced, the book's key characters include Police Superintendent Thomas Byrnes and Inspector Alexander "Clubber" Williams, the nation's most famous cops, as well as anarchist revolutionary Emma Goldman, the zealous prosecutor John W. Goff, and an
array of politicos, immigrant leaders, labor bosses, prostitutes, show-business entrepreneurs, counterfeiters, and reformers and muckrakers determined to change business as usual. New York Exposed offers an unforgettable portrait of a city in a truly transformative moment.

Daniel Czitrom is Professor of History at Mount Holyoke College, and the author of Media and the American Mind: From Morse to McLuhan (North Carolina, 1982)