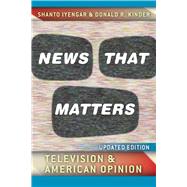 Almost twenty-five years ago, Shanto Iyengar and Donald R. Kinder first documented a series of sophisticated and innovative experiments that unobtrusively altered the order and emphasis of news stories in selected television broadcasts. Their resulting bookNews That Matters,now hailed as a classic by scholars of political science and public opinion alike, is here updated for the twenty-first century, with a new preface and epilogue by the authors. Backed by careful analysis of public opinion surveys, the authors show how, despite changing American politics, those issues that receive extended coverage in the national news become more important to viewers, while those that are ignored lose credibility. Moreover, those issues that are prominent in the news stream continue to loom more heavily as criteria for evaluating the president and for choosing between political candidates. "News That Mattersdoes matter, because it demonstrates conclusively that television newscasts powerfully affect opinion. . . . All that follows, whether it supports, modifies, or challenges their conclusions, will have to begin here."The Public Interest
Shanto Iyengar is the Harry and Norman Chandler Professor of Communication, professor of political science, and director of the Political Communication Lab at Stanford University. He is the author of several other books, including Is Anyone Responsible? How Television Frames Political Issues, also published by the University of Chicago Press. Donald R. Kinder is the Philip E. Converse Collegiate Professor in the Department of Political Science and professor of psychology and research professor in the Center for Political Studies of the Institute for Social Research at the University of Michigan. He is the author or coauthor of several other books, including Us Against Them: Ethnocentric Foundations of American Opinion (with Cindy D. Kam) and Divided by Color: Racial Politics and Democratic Ideals, both of which are published by the University of Chicago Press.
What is included with this book?