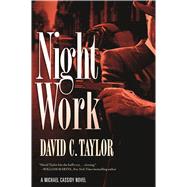 Michael Cassidy, a New York cop plagued by dreams that sometimes come true, escorts a prisoner accused of murder to Havana on the cusp of Fidel Castro's successful revolution against the Batista dictatorship. After delivering the man to La Cabaña prison and rescuing Dylan McCue, a Russian KGB agent and his now-married former lover, from her scheduled execution, Cassidy returns to New York and retreats into the comforts of alcohol and sex.

The arrival of Fidel Castro in New York three months later complicates the cop's life once more. Cassidy's investigation of a young man's murder in Central Park is interrupted when he is assigned to Castro's protective detail.

Castro has many enemies. American mobsters who have been run out of Havana, businessmen who worry about their investments in Cuba, and members of Batista's secret police all want him dead. Cassidy is already investigating one murder. Can he prevent another?

DAVID C. TAYLOR was born and raised in New York City. He spent twenty years in Los Angeles writing for television and the movies. He has published short stories and magazine articles, and has had an Off-Broadway musical produced in New York. He is the author of Night Work and now divides his time between Boston and the coast of Maine.
What is included with this book?