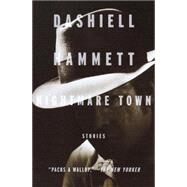 "Hammett's pioneering hard-boiled style has been much imitated, but the original--packs a wallop."--The New Yorker Here are twenty long-unavailable stories by the master who brought usThe Maltese Falcon. Laconic coppers, lowlifes, and mysterious women double- and triple-cross their colleagues with practiced nonchalance. A man on a bender awakens in a small town with a dark mystery at its heart. A woman confronts a brutal truth about her husband. Here is classic noir: hard-boiled descriptions to rival Hemingway, verbal exchanges punctuated with pistol shots and fisticuffs. Devilishly plotted, whip-smart, impassioned,Nightmare Townis a treasury of tales from America's poet laureate of the dispossessed.
Dashiell Samuel Hammett was born in St. Mary’s County. He grew up in Philadelphia and Baltimore. Hammett left school at the age of fourteen and held several kinds of jobs thereafter—messenger boy, newsboy, clerk, operator, and stevedore, finally becoming an operative for Pinkerton’s Detective Agency. Sleuthing suited young Hammett, but World War I intervened, interrupting his work and injuring his health. When Sergeant Hammett was discharged from the last of several hospitals, he resumed detective work. He soon turned to writing, and in the late 1920s Hammett became the unquestioned master of detective-story fiction in America. In <b>The Maltese Falcon</b> (1930) he first introduced his famous private eye, Sam Spade. <b>The Thin Man</b> (1932) offered another immortal sleuth, Nick Charles. <b>Re
What is included with this book?

A Ford -- whitened by desert travel until it was almost indistinguishable from the dust-clouds that swirled around it -- came down Izzard's Main Street. Like the dust, it came swiftly, erratically, zigzagging the breadth of the roadway.
A small woman -- a girl of twenty in tan flannel -- stepped into the street. The wavering Ford missed her by inches, missing her at all only because her backward jump was bird-quick. She caught her lower lip between white teeth, dark eyes flashed annoyance at the rear of the passing machine, and she essayed the street again.
Near the opposite curb the Ford charged down upon her once more. But turning had taken some of its speed. She escaped it this time by scampering the few feet between her and the sidewalk ahead.
Out of the moving automobile a man stepped. Miraculously he kept his feet, stumbling, sliding, until an arm crooked around an iron awning-post jerked him into an abrupt halt. He was a large man in bleached khaki, tall, broad, and thick-armed; his gray eyes were bloodshot; face and clothing were powdered heavily with dust. One of his hands clutched a thick, black stick, the other swept off his hat, and he bowed with exaggerated lowness before the girl's angry gaze.
The bow completed, he tossed his hat carelessly into the street, and grinned grotesquely through the dirt that masked his face -- a grin that accented the heaviness of a begrimed and hair-roughened jaw.
"I beg y'r par'on," he said. "'F I hadn't been careful I believe I'd a'most hit you. 'S unreli'ble, tha' wagon. Borr'ed it from an engi -- eng'neer. Don't ever borrow one from eng'neer. They're unreli'ble."
The girl looked at the place where he stood as if no one stood there, as if, in fact, no one had ever stood there, turned her small back on him, and walked very precisely down the street.
He stared after her with stupid surprise in his eyes until she had vanished through a doorway in the middle of the block. Then he scratched his head, shrugged, and turned to look across the street, where his machine had pushed its nose into the red-brick side wall of the Bank of Izzard and now shook and clattered as if in panic at finding itself masterless.
"Look at the son-of-a-gun," he exclaimed.
A hand fastened upon his arm. He turned his head, and then, though he stood a good six feet himself, had to look up to meet the eyes of the giant who held his arm.
"We'll take a little walk," the giant said.
The man in bleached khaki examined the other from the tips of his broad-toed shoes to the creased crown of his black hat, examined him with a whole-hearted admiration that was unmistakable in his red-rimmed eyes. There were nearly seven massive feet of the speaker. Legs like pillars held up a great hogshead of a body, with wide shoulders that sagged a little, as if with their own excessive weight. He was a man of perhaps forty-five, and his face was thick-featured, phlegmatic, with sunlines around small light eyes -- the face of a deliberate man.
"My God, you're big!" the man in khaki exclaimed when he had finished his examination; and then his eyes brightened. "Let's wrestle. Bet you ten bucks against fifteen I can throw you. Come on!"
The giant chuckled deep in his heavy chest, took the man in khaki by the nape of the neck and an arm, and walked down the street with him.

Excerpted from Nightmare Town: Stories by Dashiell Hammett
All rights reserved by the original copyright owners. Excerpts are provided for display purposes only and may not be reproduced, reprinted or distributed without the written permission of the publisher.