Nine Horrors and a Dream 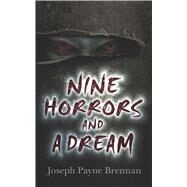 Acclaimed by Stephen King as "a master of the unashamed horror tale," Joseph Payne Brennan wrote hundreds of tales of terror, suspense, and fantasy. Collectors and fans will delight in this inexpensive reissue of Brennan's hard-to-find classic, Nine Horrors and a Dream. This collection, originally published by Arkham House in 1958, features stories published by Weird Tales and other pulp magazines of the 1950s — including the much-anthologized "Slime," which inspired the ever-popular thriller The Blob.
Less familiar but equally gripping tales include "Levitation," in which a carnival-goer has an unfortunate encounter with a hypnotist; "The Calamander Chest," the story of a low-priced antique that turns out to be no bargain; "Death in Peru," involving a lethal curse; the darkly humorous "On the Elevator"; and "The Green Parrot," which recounts a Good Samaritan's bad timing. Other selections include "Canavan's Back Yard," featuring a property with a gruesome history; "I'm Murdering Mr. Massington," which tells of a bizarre grasp at immortality; "The Hunt," a playfully creepy yarn about an obsessive chase; and "The Mail for Juniper Hill," in which a tipsy but determined postman refuses to let anything — even death — keep him from his appointed rounds.
A poet as well as a writer of horror fiction, Connecticut native Joseph Payne Brennan (1918–90) worked at Yale's Sterling Memorial Library as an acquisitions assistant for over 40 years. He wrote hundreds of stories for Weird Tales and other pulp magazines and published his own periodical, Macabre, from 1957 to 1976.
Slime
Levitation
The Calamander Chest
Death in Peru
On the Elevator
The Green Parrot
Canavan’s Back Yard
I’m Murdering Mr. Massington
The Hunt
The Mail for Juniper Hill