Nobodys Baby But Mine 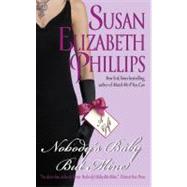 The Plan Genius physics professor Dr, Jane Darlington desperately wants a baby. But finding a father won't be easy. Jane's super-intelligence made her feel like a freak when she was growing up, and she's determined to spare her own child that suffering. Which means she must find someone very special to father her child. Someone . . . well . . stupid. The Target Cal Bonner, the Chicago Stars' legendary quarterback, seems like the perfect choice. But his champion good looks and down-home ways are deceiving. Dr. Jane learns too late that this good ol'boy is a lot smarter than he lets on -- and he's not about to be used and abandoned by a brainy baby-mad schemer. The Explosion A brillant, lonely woman who dreams only of motherhood . . . A take no-prisoners tough guy who'll settle for nothing less than surrender . . . Can passion and physical attraction propel two strong-willed yet vulnerable people to a totally unexpected love?
Nobody's Baby But Mine

"Let me get this straight," Jodie Pulanski said. "You want to give Cal Bonner a woman for a birthday present."

The three offensive linemen, who were spending the November evening sitting in the back booth at Zebras, the DuPage County sports bar favored by the Chicago Stars football players, all nodded at once.

Junior Duncan gestured toward the waitress for another round. "He's going to be thirty-six, so we wanted to make this extra special."

"Bull," Jodie said. Everybody who knew anything about football knew that Cal Bonner, the Stars' brilliant quarter back, had been demanding, temperamental, and generally impossible to get along with ever since the season started. Bonner, popularly known as the "Bomber" because of his fondness for throwing explosive passes, was the top-ranked quarterback in the AFC and a legend.

Jodie crossed her arms over the form-fitting white tank top that was part of her hostess uniform. It didn't occur to either her or any of the three men at the table to consider the moral dimensions of their discussion, let alone notions of political correctness. This was, after all, the NFL. "You think if you get him a woman, he'll ease up on all of you," she said.

Willie Jarrell gazed down into his beer through a pair of thickly-lashed dark brown eyes. "Sonovabitch been kickin' so much ass lately, nobody can stand being around him."

Jodie lifted one eyebrow, which was penciled several shades darker than her brassy blond hair. Germaine Clark was All-Pro and one of the meanest defensive tackles in the NFL. "From what I've seen, the Bomber already has more women than he knows what to do with."

Junior nodded. "Yeah, but, the thing of it is, he doesn't seem to be sleepin' with any of them?"

"It's true." Chris Plummer, the Stars' left guard spoke up. "We just found it out. His girlfriends have been talking to some of the wives, and it seems Cal's not using them for anything more than window dressing."

Willie Jarrell spoke up. "Maybe if he waited until they were out of diapers, he could get turned on."

Junior chose to take his remark seriously. "Don't say things like that, Willie. You know Cal won't date 'em till they're twenty."

Cal Bonner might be getting older, but the females in his life weren't. No one could remember him dating anyone over the age of twenty-two.

"Far as anybody knows," Willie said, "the Bomber hasn't slept with anybody since he broke up with Kelly, and that was last February. It's not natural."

Kelly Berkley had been Cal's beautiful twenty-one-year old companion until she'd gotten tired of waiting for a wedding ring that wasn't ever going to come and run off with a twenty-three-year-old guitarist for a heavy metal band. Since then, Cal Bonner had been concentrating on winning football games, dating a new woman every week, and kicking his teammates' asses.

Jodie Pulanski was the Stars' favorite groupie, but although she hadn't yet turned twenty-three, none of the men suggested that she offer her own body as Cal Bonner's birthday present. It was a well-known fact he'd already rejected her at least a dozen times. That made the Bomber Public Enemy Number One on Jodie's personal hate list, even though she kept a collection of blue-and-gold Stars' jerseys in her bedroom closet, one jersey for every Stars player she'd slept with, and was always eager to add more.

"What we need is somebody who won't remind him of Kelly," Chris said.

"That means she needs to be real classy," Willie added. "And older. We think it would be good for the Bomber to try someone maybe twenty-five."

"Sort of dignified." Junior took a sip of beer. "One of those society types."

Jodie's wasn't known for her brains, but even she could see the problem with that one. "I don't think too many society types are going to volunteer to be a man's birthday present. Not even Cal Bonner's."

"Yeah, that's what we was thinking, too, so we might have to use a hooker."

"But a real classy one," Willie said hastily, since every one knew Cal didn't go for hookers.

Junior gazed glumly into his beer. "Problem is, we haven't been able to find one."

Jodie knew some hookers, but none of them were what she'd call classy. Neither were her friends. She ran with a group of hard-drinking, party-loving women, whose single goal in life was to sleep with as many professional athletes as they could. "What do you want from me?"

"We want you to use your connections and find somebody for him," Junior said. "His birthday's coming up in ten days, and we got to have a woman for him before then."

Since all three of their jerseys already hung in her closet, they knew they'd have to go out on a limb. Chris spoke cautiously. "You got a particular number you're interested in adding to your collection?"

"Other than number eighteen," Willie quickly interjected, eighteen being the Bomber's number.

Jodie thought about it. She'd rather screw over the Bomber than find him a woman. On the other hand, there was one particular number that she wanted real bad. "As a matter of fact, I do. If I find your birthday present, number twelve's mine."

The men groaned. "Shit, Jodie, Kevin Tucker's got too many women as it is."

Tucker was the Stars' backup quarterback. Young, aggressive, and sublimely talented, he had been hand-picked by the Stars to take over the starting position when age or injury prevented Cal from getting the job done. Although the two men were polite in public, both were fierce competitors, and they hated each other's guts, which made Kevin Tucker all the more desirable to Jodie.

The men grumbled, but eventually agreed that they'd make sure Tucker did his part if she found the right woman for Cal's birthday present.

Two new customers entered Zebras, and since Jodie was the bar's hostess, she got up to greet them. As she made her way to the door, she mentally sorted through her female acquaintances, trying to come up with one of them who would qualify, but she drew a blank. She had a lot of female friends, but not a single one of them was classy.

Nobody's Baby But Mine. Copyright © by Susan Phillips. Reprinted by permission of HarperCollins Publishers, Inc. All rights reserved. Available now wherever books are sold.

Excerpted from Nobody's Baby but Mine by Susan Elizabeth Phillips
All rights reserved by the original copyright owners. Excerpts are provided for display purposes only and may not be reproduced, reprinted or distributed without the written permission of the publisher.