, by Thong, Roseanne Greenfield; So, Meilo 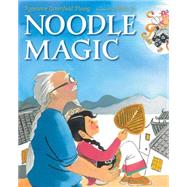 Everyone has the magic within!

Grandpa Tu is famous for his special noodles, and as the emperor's birthday approaches, he teaches his granddaughter, Mei, the family trade. Mei struggles to find the magic needed to make noodles. Ultimately, she finds the magic--and the ability to succeed--within. Mei doesn't just make noodles--her magic noodles in varied shapes and sizes rain down from the sky!

NOODLE MAGIC is written in the style of a Chinese folk story, with engaging cultural and community aspects. The family connection that's at the heart of the story has universal appeal. The grandfather and granddaughter work together to accomplish what one could not do alone. Meilo So, whose BRUSH OF THE GODS received four starred reviews, brings the story to life with beautiful, breathtaking illustrations.
Roseanne Greenfield Thong lived in Asia for more than fifteen years and currently lives in Southern California. She is the author of more than a dozen picture books, including ROUND IS A MOONCAKE, RED IS A DRAGON, and WISH. Visit her online at www.greenfield-thong.com.

Meilo So was born in Hong Kong, packaged in England, and domiciled in the Shetland Islands. She enjoys working with a variety of methods, media, and subjects. She is also the illustrator of BRUSH OF THE GODS, WATER SINGS BLUE, ALEX THE PARROT, and THE 20TH CENTURY CHILDREN'S POETRY TREASURY. For more information, go to www.meiloso.com.
What is included with this book?