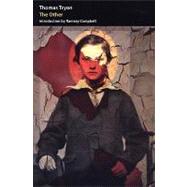 Entranced and terrified, the reader of The Other is swept up in the life of a Connecticut country town in the thirties-and in the fearful mysteries that slowly darken and overwhelm it. Originally published in 1971, The Other is one of the most influential horror novels ever written. Its impeccable recreation of small-town life and its skillful handling of the theme of personality transference between thirteen-year-old twins led to widespread critical acclaim for the novel, which was successfully filmed from Thomas Tryon's own screenplay. This edition features original artwork by surrealist artist Harry O. Morris.