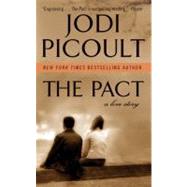 Until the phone calls came at three o'clock on a November morning, the Golds and their neighbors, the Hartes, had been inseparable. It was no surprise to anyone when their teenage children, Chris and Emily, began showing signs that their relationship was moving beyond that of lifelong friends. But now seventeen-year-old Emily is dead-shot with a gun her beloved and devoted Chris pilfered from his father's cabinet as part of an apparent suicide pact-leaving two devastated families stranded in the dark and dense predawn, desperate for answers about an unthinkable act and the children they never really knew. From New York Times bestselling author Jodi Picoult-one of the most powerful writers in contemporary fiction-comes a riveting, timely, heartbreaking, and terrifying novel of families in anguish and friendships ripped apart by inconceivable violence.
The Pact
A Love Story

There was nothing left to say.

He covered her body with his, and as she put her arms around him she could picture him in all his incarnations: age five, and still blond; age eleven, sprouting; age thirteen, with the hands of a man. The moon rolled, sloe-eyed in the night sky; and she breathed in the scent of his skin. "I love you," she said.

He kissed her so gently she wondered if she had imagined it. She pulled back slightly, to look into his eyes.

And then there was a shot.

Although there had never been a standing reservation made, the rear corner table of the Happy Family Chinese restaurant was always saved on Friday nights for the Hartes and the Golds, who had been coming there for as long as anyone could remember. Years ago, they had brought the children, littering the crowded nook with high chairs and diaper bags until it was nearly impossible for the waiters to maneuver the steaming platters of food onto the table. Now, it was just the four of them, blustering in one by one at six o'clock and gravitating close as if, together, they exerted some kind of magnetic pull.

James Harte had been first to arrive. He'd been operating that afternoon and had finished surprisingly early. He picked up the chopsticks in front of him, slipped them from their paper packet, and cradled them between his fingers like surgical instruments.

"Hi," Melanie Gold said, suddenly across from him. "I guess I'm early."

"No," James answered. "Everyone else is late."

"Really?" She shrugged out of her coat and balled it up beside her. "I was hoping I was early. I don't think I've ever been early."

"You know," James said, considering, "I don't think you ever have."