Passing on the Right Conservative Professors in the Progressive University 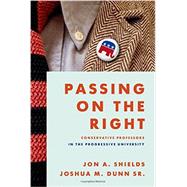 Liberals represent a large majority of American university and college faculty, especially in the social sciences and humanities. This is a consistent finding challenged by no serious student. Does minority status affect the work of conservative scholars or the academy as a whole? In Passing on the Right, Dunn and Shields explore the actual experiences of conservative academics, which have long been neglected. While partisans on both sides have been preoccupied with the narrow question of whether or not conservative professors are passed over in hiring and promotion decisions, Dunn and Shields argue that the liberal dominance of the academy may affect conservatives in ways that are far more open to verification - for example, in the case of conservative professors who may censor their comments in public forums and avoid controversial questions in their research, especially prior to tenure. Conversely, minority status may also have its benefits, perhaps allowing conservatives to discover more original research questions and interpretations due to not being able to share the ideological assumptions of most of their liberal colleagues.

Drawing on a collection of revealing interviews with conservative professors and graduate students, Dunn and Shields discover how these scholars negotiate their worlds, asking questions such as: How often do conservatives remain closeted? Do they discourage conservative undergraduate students from pursuing academic careers? Do they avoid mentoring conservative student groups? Do they see any professional advantages to being part of a political minority? In short, how does the liberalism of the academy shape conservative scholars and influence their sense of academic freedom? By avoiding partisanship and offering an insightful portrayal of this misunderstood political minority, this book aims to persuade liberal elites to take the minority status of conservative academics more seriously and encourage conservatives to move beyond simplistic caricatures of life in the liberal academy.

Jon A. Shields is Associate Professor in the Department of Government at Claremont McKenna College.

Joshua M. Dunn Sr. is Associate Professor of Political Science and Associate Director of the Center for the Study of Government and the Individual at the University of Colorado-Colorado Springs.