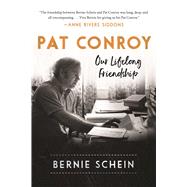 “Bernie Schein is the funniest man alive, or so he has dogmatically maintained during the burdensome decades I have known him. . . . [He is] by turns hysterically funny, wildly neurotic, uniquely sensitive, and heartbreakingly honest.”—Pat Conroy

Pat Conroy, the bestselling author of The Prince of Tides and The Great Santini among many other books, was beloved by millions of readers. Bernie Schein was his best friend from the time they met in a high-school pickup basketball game in Beaufort, South Carolina, until Conroy’s death in 2016.

Both were popular but also outsiders as a Jew and a Catholic military brat in the small-town Bible-Belt South, and they bonded. Wiseass and smart aleck, loudmouths both, they shared an ebullient sense of humor and romanticism, were mesmerized by the highbrow and reveled in the low, and would sacrifice entire evenings and afternoons to endless conversation. As young teachers in the Beaufort area and later in Atlanta, they were activists in the civil rights struggle and against institutional racism and bigotry. Bernie knew intimately the private family story of the Conroys and his friend’s difficult relationship with his Marine Corps colonel father that Pat would draw on repeatedly in his fiction.

A love letter and homage, and a way to share the Pat he knew, this book collects Bernie’s cherished memories about the gregarious, welcoming, larger-than-life man who remained his best friend, even during the years they didn’t speak. It offers a trove of insights and anecdotes that will be treasured by Pat Conroy’s many devoted fans.
Bernie Schein was born, bred, and Bar Mitzvahed in Beaufort, South Carolina. He was an educator for forty-five years, many of them in Atlanta. He is the author of three books, including If Holden Caulfield Were in My Classroom and the novel Famous All over Town. He has been published and featured in numerous newspapers and magazines, including Newsweek, the Jewish Advocate, Atlanta magazine, and the Atlanta Journal-Constitution, and interviewed on NPR and radio stations across the country. He is now an educational consultant as well as a humorist and raconteur. He and his wife live in Beaufort, South Carolina.