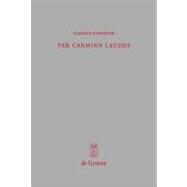 This monograph provides a review of the history of praise of rulers composed in hexameters (so-called panegyric epic) from the fourth to the sixth century A.D. Panegyric epic is a form of literature that only came to be of particular importance in Late Antiquity, although it drew upon and adapted a variety of Graeco-Roman literary traditions. Following a general description of the literary and historical-cultural preconditions for the development of Late Antique panegyric, this study presents its most important practitioners and their works, as well as detailing the development of the various traditions of Late Antique verse panegyric.