The Pericope of the Adulteress in Contemporary Research 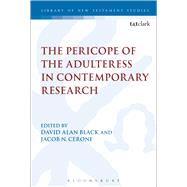 The contributors to this volume (J.D. Punch, Jennifer Knust, Tommy Wasserman, Chris Keith, Maurice Robinson, and Larry Hurtado) re-examine the Pericope Adulterae (John 7.53-8.11) asking afresh the question of the paragraph's authenticity. Each contributor not only presents the reader with arguments for or against the pericope's authenticity but also with viable theories on how and why the earliest extant manuscripts omit the passage.

Readers are encouraged to evaluate manuscript witnesses, scribal tendencies, patristic witnesses, and internal evidence to assess the plausibility of each contributor's proposal. Readers are presented with cutting-edge research on the pericope from both scholarly camps: those who argue for its originality, and those who regard it as a later scribal interpolation. In so doing, the volume brings readers face-to-face with the most recent evidence and arguments (several of which are made here for the first time, with new evidence is brought to the table), allowing readers to engage in the controversy and weigh the evidence for themselves.