Philosophy of Science An Historical Anthology 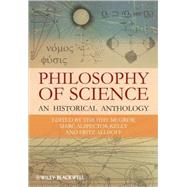 Philosophers of science ask various questions regarding the structures and aims of scientific reasoning, whether as practiced or as they should be. Despite the status that these inquiries realized in the 20th century, they have long traditions. Scientists since antiquity have investigated, not just the natural order that is their primary subject matter, but also the nature of scientific inquiry itself. Philosophy of Science: An Historical Anthology represents primary source material from throughout this tradition, as well as extensive commentary reflecting upon those materials. By combining excerpts from key historical writings with insightful running commentary by experts, this distinctive new volume points out the common strands running through some 2,500 years of scientific and philosophical debate. Beginning with the Ancient Greeks, Part 1 begins by examining the roots of ancient and medieval philosophy of science before proceeding to the Scientific Revolution, with extensive coverage of scientists like Copernicus, Kepler, Galileo, and Newton as well as classic modern philosophers like Descartes, Hume, and Kant. Part 1 concludes with a generous survey of 19th and early 20th century philosophers and scientists such as Herschel, Lyell, Darwin, Peirce and Einstein. Part 2 covers the 20th-century philosophy of science, first laying out the foundations of logical positivism and the emergence of the "received view" and then tracing challenges to the received view and the impact of that downfall on issues in contemporary philosophy of science, such as confirmation and observation, methodology, and realism. Unmatched in breadth and depth, and offering extensive and accessible commentary, Philosophy of Science: An Historical Anthology is a comprehensive work that will take the reader on a grand tour of the philosophy of science from antiquity to the modern age.
Timothy McGrew is Professor and Chairman of the Department of Philosophy at Western Michigan University.