The Physics of Christianity 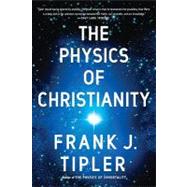 A highly respected physicist demonstrates that the essential beliefs of Christianity are wholly consistent with the laws of physics. Frank Tipler takes an exciting new approach to the age-old dispute about the relationship between science and religion inThe Physics of Christianity.In reviewing centuries of writings and discussions, Tipler realized that in all the debate about science versus religion, there was no serious scientific research into central Christian claims and beliefs. So Tipler embarked on just such a scientific inquiry.The Physics of Christianitypresents the fascinating results of his pioneering study. Tipler begins by outlining the basic concepts of physics for the lay reader and brings to light the underlying connections between physics and theology. In a compelling example, he illustrates how the God depicted by Jews and Christians, the Uncaused First Cause, is completely consistent with the Cosmological Singularity, an entity whose existence is required by physical law. His discussion of the scientific possibility of miracles provides an impressive, credible scientific foundation for many of Christianity's most astonishing claims, including the Virgin Birth, the Resurrection, and the Incarnation. He even includes specific outlines for practical experiments that can help prove the validity of the "miracles" at the heart of Christianity. Tipler's thoroughly rational approach and fully accessible style setsThe Physics of Christianityapart from other books dealing with conflicts between science and religion. It will appeal not only to Christian readers, but also to anyone interested in an issue that triggers heated and divisive intellectual and cultural debates.

FRANK J. TIPLER is a professor of mathematical physics at Tulane University and the author of The Physics of Immortality. He lives in New Orleans, Louisiana.