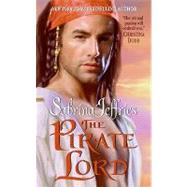 A Splendid OpportunityA shipload of women#8212theirs for the taking! Pirate captain Gideon Horn couldn't be more delighted. His men are tired of wandering the high seas and want to settle down with wives on the uncharted island paradise they've discovered. And the women are bound to be grateful to be rescued from the life of drudgery awaiting them in New South Wales . . .Lord, he's so clever!A Splendid PassionMarried? To pirates? Sara Willis couldn't be more appalled. First she demands proper courting-at least a month. The darkly handsome pirate lord gives them two weeks. Then Sara insists the men vacate their huts for the women-Gideon demands her kisses in return. As the demands heat up, so do their passions-and soon Sara can't remember just why she's fighting the devilishly seductive captain so hard. . .
The Pirate Lord

How much it is to be regretted, that the British ladies should ever sit down contented to polish, when they are able to reform. . . .

Miss Sara Willis had known a great many awkward moments in her twenty-three years. There was the time as a seven-year-old when her mother had caught her filching biscuits from the grand kitchen at Blackmore Hall, or the time shortly afterward when she'd fallen into the fountain at her mother's wedding to her stepfather, the late Earl of Blackmore. Then there was the ball last year when she'd unwittingly introduced the Duchess of Merrington to the duke's mistress.

But none of those compared to this&#8212being physically accosted by her stepbrother as she departed from Newgate Prison in the company of the Ladies' Committee. Jordan Willis—the new Earl of Blackmore, Viscount Thornworth, and Baron Ashley—wasn't the sort of man to mask his disapproval, as so many members of Parhament had learned to their detriment. And now he took charge of her person with a shameless lack of propriety,propelling her toward the waiting Blackmore carriage as if she were the merest child.

She could hear the choked laughter of her friends Jordan jerked open the door of the carriage and glowered at her.

"Into the carriage, Sara. Now."

'Jordan, really, such dramatics are not neces—"

Swallowing her dismay and embarrassment climbed into the well-appointed carriage dignity as she could muster. He slammed the door, then threw himself onto the seat across from her with such force that the carriage rocked on its springs.

As he ordered the coachman to drive on, she casts an apologetic glance out the window toward her friends. She was supposed to join them at Mrs. Fry's for tea, but they must realize that was impossible now.

"Deuce take it, Sara, stop making sad faces at your friends and look at me!"

Settling her slender frame against the damask cushions, she faced her stepbrother. She opened her mouth to chastise him for his untoward handling of her, then closed it when she saw the ominous furrowing of his brow. Though she was used to Jordan's formidable temper, she didn't at all like being the recipient of it. Most of London society joined her in that particular dislike, for Jordan was frightening indeed when he was angry.

If he could ask a question like that, she thought, perhaps he wasn't so very angry after all. Folding her hands in her lap, she surveyed him. His cravat was crookedly tied, most unusual for him. His auburn hair was in its natural unruly state, and his frock coat and trousers were rumpled. "Rather mussed, to be truthful. You need a shave, and your clothes are—"

"Do you know why I look this way? Do you have any idea what brought me racing from the country without taking time to sleep or groom myself properly?" His scowl forced his dark auburn brows into a solid line of disapproval.

She tried to match it but failed miserably. Scowling wasn't her forte. "You were eager for my company?" she ventured.

"It's nothing to joke about," he growled in that warning tone he used to cow the matrons at the marriage marts who attempted to introduce him to their daughters. "You know quite well why I'm here. And no matter how charming you make yourself, I wont overlook this latest mad scheme of yours."

Good heavens. He couldn't possibly know, could he? "Wh-what mad scheme? The Ladies' Committee and I were merely distributing baskets of food to the poor unfortunates at Newgate."

"Don't lie, Sara. You do it badly. You know quite well that's, not why you were at Newgate." He crossed his arms over his snug-fitting frock coat, daring her to contradict him.

Did he know the truth? Or was he bluffing? It was always hard to tell with Jordan. Even when he was eleven and her mother had married his father and brought Sara to live at Blackmore Hall, Jordan had been completely inscrutable, especially when trying to worm something out of her.

Well, she could be just as uncommunicative. Crossing her arms over her chest to mimic him, she asked, "So why was I at Newgate, Mr. All-Knowing?"

No one could get away with mocking Jordan. The only reason he endured it from her was because he truly considered her his sister, despite the lack of blood between them. Still, judging from the glint in his brown eyes, she was trespassing farther than he liked on his goodwill.

"You were at Newgate meeting the women who are being transported to New South Wales on the convict ship that leaves in three days, because you have some fool idea about sailing with them." When she opened her mouth to protest, he added, "Don't try to deny it. Hargraves told me everything."

Oh, bother it all. The butler had told him? But Hargraves had always been loyal to her. What had made the wretch betray her confidence?

Feeling defeated, she slumped against the, seat and stared out at the sky, which was thick as clotted cream with heavy fog and dew. They were traveling along Fleet Street now. Usually the grubby bustling of its ink-stained denizens cheered her, for it showed that someone at least was trying to make a difference in society. But nothing could cheer her now.

Jordan went on, his voice clipped. "When I received Hargraves's letter, I left a great deal of unfinished work at Blackmore Hall so I could rush to London to talk some sense into you."

"That's the last time I trust Hargraves," she muttered.

"Don't be like that, Sara. I've told you before, while you may ignore the dangers you encounter with that Quaker woman Mrs. Fry and her Ladies' Committee, the servants and I do not." The note of concern in his voice, grew more pronounced. "Even Hargraves, who approves of your reform efforts, is no fool. He recognizes how risky your new scheme is. He merely did his duty by telling me. If he hadn't, I would have sacked him, and he knows it."

She stared at her handsome stepbrother, whose auburn hair and chestnut eyes so resembled her own that people often mistook, her for his real sister. Sometimes his attempts to protect her were endearing. Mostly, they were tedious. If not for his time-consuming duties as the new earl, she would never be able to engage in the pursuits she deemed more important than safety or propriety.

The Pirate Lord. Copyright © by Sabrina Jeffries. Reprinted by permission of HarperCollins Publishers, Inc. All rights reserved. Available now wherever books are sold.

Excerpted from The Pirate Lord by Sabrina Jeffries, Deborah Martin
All rights reserved by the original copyright owners. Excerpts are provided for display purposes only and may not be reproduced, reprinted or distributed without the written permission of the publisher.