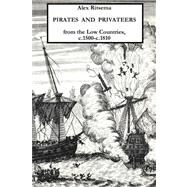 In novels, cartoons and films, "the" pirate had a wooden leg, a parrot on one of his shoulders, a patch before one of his eyes and buried his treasures on remote shores or islands... This book is not about fictional pirates but about real ones but their stories are equally spectacular. Some of them were not "pirates" but "privateers" equipped with a "letter of marque", an official license to attack enemies in times of war. Among other Dutch, Frisian and Flemish freebooters, this book includes: Grutte Pier, a folk hero defending the Frisian freedom against the Hollanders around 1520; the "Sea-Beggars" and their decisive role in the War of Dutch Independence (1568-1648); the Dunkirk raiders harassing merchant vessels from Amsterdam; adventurers joining the legendary pirates of Barbary or the Caribbean. This book not only deals with the freebooters themselves but also with their victims and foes, as well as corrupt shipowners and corrupt judges of Prize Courts.
What is included with this book?