Pluralism and the Pragmatic Turn : The Transformation of Critical Theory: Essays in Honor of Thomas McCarthy 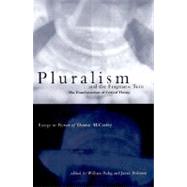 The essays in this volume reflect on and expand Frankfurt School critical theory as reformulated after World War II by Karl-Otto Apel, Juuml;rgen Habermas, and others. Frankfurt School critical theory since the pragmatic turn has become a richer source of critical analysis that is at the same time socially and politically more effective. The essays are dedicated to Thomas McCarthy, who has done perhaps more than any other scholar to introduce English-speaking audiences to contemporary German critical theory. The book is organized into three parts. Part one deals with social theory and the rational basis of communication, including basic issues raised by the pragmatic turn. Part two examines conceptions of autonomy and the self. Part three deals with political theory, focusing on problems stemming from sociocultural pluralism. Together, the essays provide an overview of the latest developments in Frankfurt School critical theory as it responds to the challenges of pragmatism and social pluralism.
What is included with this book?