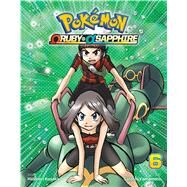 Awesome adventures inspired by the best-selling new Pokémon Omega Ruby and Alpha Sapphire video games and picking up where the Pokémon Adventures Ruby and Sapphire saga left off!

In the heart-stopping finale, Ruby and Sapphire need the help of Gym Leaders, the Frontier Brains, the Elite Four and even former enemies—including their archenemy Giovanni!—to save the world. But it turns out the meteor they’ve been tracking isn’t the only danger hurtling toward their planet! Zinnia holds the key to saving everyone, but she’s down for the count. Who will partner with Ruby and Rayquaza to save the day?!
Hidenori Kusaka is the writer for VIZ Media’s Pokémon Adventures. Running continuously for over 20 years, Pokémon Adventures is the only manga series to completely cover all the Pokémon games and has become one of the most popular series of all time. Kusaka is currently working on the 14th story arc, Pokémon: Sun & Moon. In addition to writing manga, he also edits children’s books and plans mixed-media projects for Shogakukan’s children’s magazines. He uses the Pokémon Electrode as his author portrait.

Satoshi Yamamoto is the artist for VIZ Media’s Pokémon Adventures, which he began working on in 2001, starting with volume 10. Yamamoto launched his manga career in 1993 with the horror-action title Kimen Senshi, which ran in Shogakukan’s Weekly Shonen Sunday magazine, followed by the series Kaze no Denshosha. He is currently working on the 14th story arc in the Pokémon series, Pokémon: Sun & Moon. Yamamoto’s favorite manga creators/artists include Fujiko Fujio (Doraemon), Yukinobu Hoshino (2001 Nights) and Katsuhiro Otomo (Akira). He loves films, monsters, mysteries, punk rock music and livin’ the good life. He uses the Pokémon Swalot as his artist portrait.