The Political Philosophy of AI An Introduction 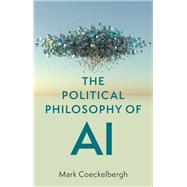 Political issues people care about such as racism, climate change, and democracy take on new urgency and meaning in the light of technological developments such as AI. How can we talk about the politics of AI while moving beyond mere warnings and easy accusations?

This is the first accessible introduction to the political challenges related to AI. Using political philosophy as a unique lens through which to explore key debates in the area, the book shows how various political issues are already impacted by emerging AI technologies: from justice and discrimination to democracy and surveillance. Revealing the inherently political nature of technology, it offers a rich conceptual toolbox that can guide efforts to deal with the challenges raised by what turns out to be not only artificial intelligence but also artificial power.

This timely and original book will appeal to students and scholars in philosophy of technology and political philosophy, as well as tech developers, innovation leaders, policy makers, and anyone interested in the impact of technology on society.​

Mark Coeckelbergh is Professor of Philosophy of Media and Technology at the University of Vienna.
Acknowledgements

3 Equality and Justice: Bias and Discrimination by AI

5 Power: Surveillance and (Self-)disciplining by Data

6 What about Non-Humans? Environmental Politics and Posthumanism