Politics in Mexico The Path of a New Democracy 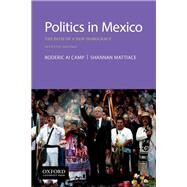 Thoroughly grounded in Mexican history and based on extensive field research, this introduction examines the roots of Mexico's contemporary political culture and its democratic transformation. Now in its seventh edition, Politics in Mexico: The Path of a New Democracy has been revised and
updated in order to address several major changes that have occurred since 2013, including the broad effort of Mexico to achieve a functional democracy; Peña Nieto's continued reliance on the armed forces to combat organized crime; an analysis of the 2018 presidential election and what López
Obrador's victory means for Mexico; and the country's slow economic growth and the importance of emphasizing poverty as a central policy issue.

2. Political-Historical Roots: The Impact of Time and Place
The Spanish Heritage
Nineteenth-Century Political Heritage
The Revolutionary Heritage: Social Violence and Reform
The Politics of Place: Interface with the United States
Conclusion

5. Rising to the Top: The Recruitment of Political Leadership in a Democratic Mexico
The Formal Rules
Informal Credentials: What Is Necessary to Rise to the Top in Mexican Politics
The Rise of Women
The Camarilla: Political Networking in Mexico
The Rise and Decline of the Technocrat
Conclusion

6. Groups and the State: An Altered Relationship in a Democratic Polity?
The Residue of Corporatism
Institutional Voices
- The Military
- The Church
- Business
- Organized Labor
- Intellectuals and the Media
Voices of Dissent
- Nongovernmental Organizations
- Social Movements
- Drug Trafficking Organizations
Conclusion