Pragmatism and the Problem of Race 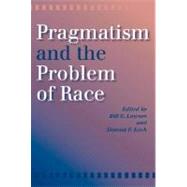 How should pragmatists respond to and contribute to the resolution of one of America's greatest and most enduring problems? Given that the most important thinkers of the pragmatist movement -- Charles S. Peirce, William James, John Dewey, and George Herbert Mead -- said little about the problem of race, how does their distinctly American way of thinking confront the hardship and brutality that characterizes the experience of many African Americans in this country? In 12 thoughtful and provocative essays, contemporary American pragmatists connect ideas with action and theory with practice to come to terms with this seemingly intractable problem. Exploring themes such as racism and social change, the value of the concept of race, the role of education in ameliorating racism, and the place of democracy in dealing with the tragedy of race, the voices gathered in this volume consider how pragmatism can focus new attention on the problem of race.Contributors are Michael Eldridge, Eddie S. Glaude, Jr., Judith M. Green, D. Micah Hester, Donald F. Koch, Bill E. Lawson, David E. McClean, Gregory F. Pappas, Scott L. Pratt, Alfred E. Prettyman, John R. Shook, Paul C. Taylor, and Cornel West.

Bill E. Lawson is Professor of Philosophy at Michigan State University. He is co-author (with Howard McGary) of Between Slavery and Freedom (IUP, 1993).

Donald F. Koch is Emeritus Professor of Philosophy at Michigan State University. He has edited three volumes of Dewey's lectures.