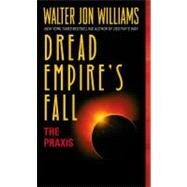 The explosive first volume in a remarkable new science fiction trilogy from the "New York Times" bestselling author of "Destiny's War" begins an epic adventure of war and domination. Original.

"Of course, following the Great Master's death, I will kill myself."

Lieutenant Gareth Martinez, keeping pace alongside the longer-legged Fleet Commander Enderby, felt himself stumble as he heard the words.

"My lord?" He drove his legs through the stumble, to stride once more off Enderby's left shoulder. Their heels rang again in unison on the shaved, glittering asteroid material that floored the Commandery.

"I've volunteered," Enderby said in his prosaic, literal tone. "My family needs a representative on the pyre, and I'm the most suitable candidate. I'm at the apex of my career, my children are well-established, and my wife has given me a divorce." He looked at Martinez from beneath his level white brows. "My death will assure that my name, and my family's name, will be honored forever."

And help everyone to forget that little financial scandal involving your wife , Martinez thought. It was a pity that Enderby's spouse couldn't be the family sacrifice instead of the Fleet Commander.

A pity for Martinez in particular.

"I've spoken to Captain Tarafah about you," Enderby went on. "He's agreed to take you aboard as communications officer on the Corona."

"Thank you, my lord," Martinez said, and tried not to let his voice reflect the dismay that echoed coldly down his bones.

The Martinez family was among the Peers, the clans that the Great Masters - the Shaa - had placed over all creation. Though all Peers were equal in the sight of the Shaa, the Peers' own views were less Olympian. It wasn't enough just to be a Peer. You had to be the right kind of Peer.

And Martinez was definitely the wrong kind. While near-omnipotent on its distant home world of Laredo, the Martinez clan were provincial nobodies to the high-caste Peers whose palaces ornamented the High City of Zanshaa. The fine gradations of rank perceived by the Peers had no status in law, but their weight was felt everywhere in Peer society. Martinez's birth entitled him to a place in the Peers' military academy followed by a commission, but that was all.

In six years' service, he had risen to lieutenant. That was as far as his father had come in a dozen years, before Marcus Martinez resigned in frustration and returned to Laredo to devote himself to making money on a grand scale.

His son knew he needed a powerful patron who would advance him in the service hierarchy. And Gareth Martinez thought he had found that patron in Fleet Commander Enderby, who seemed impressed with his abilities and was willing to overlook his obscure home and the wretched provincial accent that, try as he might, he'd been unable to lose.

What do you do when your senior officer announces his intention to commit suicide? Martinez wondered. Try to talk him out of it?

"Tarafah is a good officer," Enderby assured. "He'll look after you."

Tarafah is only a lieutenant captain , Martinez thought. So even if Tarafah decided that he was the most brilliant officer he'd ever met - and the chances of that were not high - Tarafah wouldn't be in a position to give him a promotion to the next rank. He could only recommend him to a superior, and that superior would be patron to another set of clients whose needs, Martinez knew, would rank greater than his own.

I am hip deep in the shit , he concluded. Unless he could talk the Fleet Commander into changing his mind about annihilating himself.

"My lord," he began, and was interrupted as another officer, Senior Squadron Commander Elkizer, approached with his entourage. Elkizer and his staff were Naxids, members of the first species to be conquered by the Shaa, and Martinez suppressed annoyance as they scuttled across the polished floor toward Enderby. Not only did they interrupt a conversation vital to Martinez's career, the Naxids were a species that had always made him uncomfortable.

Perhaps it was the way they moved. They had six limbs, four legs, and another, upper pair that could be used as either arms or legs. They seemed to have only two speeds: stop , and very, very fast . When they moved, the four feet were in continual motion, scrabbling at the ground, heedless of terrain or even of success. Their feet flung their bodies forward as fast as they could, and when they wanted to go particularly fast, they lowered their centauroid bodies to the ground and used the front two limbs as well, their bodies snaking from side to side in a liquid whiplike motion that frankly gave Martinez the creeps.

The Naxids' bodies were covered with black, beaded scales ornamented with a shifting pattern of red. The swift-moving scarlet patterns were used for communication among them, a language which other species found difficult or impossible to decipher. In order not to hamper this communication, Naxid officers wore uniforms of chameleon weave that faithfully duplicated the patterns flashing underneath.

On their home world, in their primitive state, the Naxids had traveled in packs led by one dominant personality - and they still did. Even without rank badges, you could tell by body language and demeanor which Naxids were dominant and which subservient. The high-ranking Naxids were impossibly arrogant, and the lower castes cringingly submissive.

Squadron Leader Elkizer scuttled toward Fleet Commander Enderby and slammed to a halt, his upper body thrown back to bare his throat for the killing stroke.

Kill me if you so desire, my lord : that was the service's ideal of subordination.

Elkizer's entourage - Martinez wanted to use the word pack--imitated their superior. Standing at attention, they came up to Enderby's chin, with bodies the size of a very large dog ...