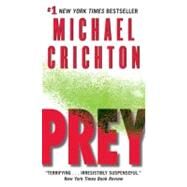 In the Nevada desert, an experiment has gone horribly wrong. A cloud of nanoparticles-micro-robots-has escaped from the laboratory. This cloud is self-sustaining and self-reproducing. It is intelligent and learns from experience. For all practical purposes, it is alive.It has been programmed as a predator. It is evolving swiftly, becoming more deadly with each passing hour.Every attempt to destroy it has failed.And we are the prey.
Prey

Things never turn out the way you think they will.

I never intended to become a househusband. Stay-at-home husband. Full-time dad, whatever you want to call it—there is no good term for it. But that's what I had become in the last six months. Now I was in Crate & Barrel in downtown San Jose, picking up some extra glasses, and while I was there I noticed they had a good selection of placemats. We needed more placemats; the woven oval ones that Julia had bought a year ago were getting pretty worn, and the weave was crusted with baby food. The trouble was, they were woven, so you couldn't wash them. So I stopped at the display to see if they had any placemats that might be good, and I found some pale blue ones that were nice, and I got some white napkins. And then some yellow placemats caught my eye, because they looked really bright and appealing, so I got those, too. They didn't have six on the shelf, and I thought we'd better have six, so I asked the salesgirl to look in the back and see if they had more. While she was gone I put the placemat on the table, and put a white dish on it, and then I put a yellow napkin next to it. The setting looked very cheerful, and I began to think maybe I should get eight instead of six. That was when my cell phone rang.

She said, "What're you doing?"

She laughed. "You the only guy there?"

"Oh, well, that's good," she said. I could tell Julia was completely uninterested in this conversation. Something else was on her mind. "Listen, I wanted to tell you, Jack, I'm really sorry, but it's going to be a late night again."

"Uh-huh ... " The salesgirl came back, carrying more yellow mats. Still holding the phone to my ear, I beckoned her over. I held up three fingers, and she put down three more mats. To Julia, I said, "Is everything all right?"

"Yeah, it's just crazy like normal. We're broadcasting a demo by satellite today to the VCs in Asia and Europe, and we're having trouble with the satellite hookup at this end because the video truck they sent—oh, you don't want to know ... anyway, we're going to be delayed two hours, hon. Maybe more. I won't get back until eight at the earliest. Can you feed the kids and put them to bed?"

"No problem," I said. And it wasn't. I was used to it. Lately, Julia had been working very long hours. Most nights she didn't get home until the children were asleep. Xymos Technology, the company she worked for, was trying to raise another round of venture capital—twenty million dollars—and there was a lot of pressure. Especially since Xymos was developing technology in what the company called "molecular manufacturing," but which most people called nanotechnology. Nano wasn't popular with the VCs—the venture capitalists—these days. Too many VCs had been burned in the last ten years with products that were supposedly just around the corner, but then never made it out of the lab. The VCs considered nano to be all promise, no products.

Not that Julia needed to be told that; she'd worked for two VC firms herself. Originally trained as a child psychologist, she ended up as someone who specialized in "technology incubation," helping fledgling technology companies get started. (She used to joke she was still doing child psychology.) Eventually, she'd stopped advising firms and joined one of them full-time. She was now a vice president at Xymos.

Julia said Xymos had made several breakthroughs, and was far ahead of others in the field. She said they were just days away from a prototype commercial product. But I took what she said with a grain of salt.

"Listen, Jack, I want to warn you," she said, in a guilty voice, "that Eric is going to be upset."

"Julia, why? We talked about making promises like this. There's no way you can make that game. It's at three o'clock. Why'd you tell him you would?"

"I thought I could make it."

"Thanks. Oh, and Jack? The placemats? Whatever you do, just don't get yellow, okay?"

And she hung up.

I made spaghetti for dinner because there was never an argument about spaghetti. By eight o'clock, the two little ones were asleep, and Nicole was finishing her homework. She was twelve, and had to be in bed by ten o'clock, though she didn't like any of her friends to know that.

The littlest one, Amanda, was just nine months. She was starting to crawl everywhere, and to stand up holding on to things. Eric was eight; he was a soccer kid, and liked to play all the time, when he wasn't dressing up as a knight and chasing his older sister around the house with his plastic sword.

Nicole was in a modest phase of her life; Eric liked nothing better than to grab her bra and go running around the house, shouting, "Nicky wears a bra-a! Nicky wears a bra-a!" while Nicole, too dignified to pursue him, gritted her teeth and yelled, "Dad? He's doing it again! Dad!" And I would have to go chase Eric and tell him not to touch his sister's things.

Excerpted from Prey by Michael Crichton
All rights reserved by the original copyright owners. Excerpts are provided for display purposes only and may not be reproduced, reprinted or distributed without the written permission of the publisher.