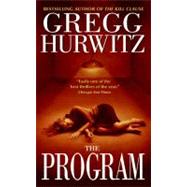 In this powerful follow-up to his action-packed thriller The Kill Clause, Gregg Hurwitz, the new maestro of pulse-pounding suspense, ratchets up the excitement with another sensational page-turner featuring Tim Rackley, a driven lawman motivated by honor, morality, and a deep sense of justice. Called back into the fold of the U.S. Marshals Service, Tim is tasked with retrieving Leah Henning, the daughter of a powerful Hollywood producer, from a mind-control cult. As Tim wends his way deep undercover into an insidious operation called The Program, he confronts a brand of mind-warping manipulation beyond his worst expectations. Tim becomes enmeshed with a diverse band of characters-from the charismatic, messianic leader T. D. Betters to a cult reject burnout to the intelligent yet highly vulnerable Leah herself-and finds himself caught in a shadowy landscape of lies, manipulation, and terror. At stake: innocent minds-maybe even his own.
What is included with this book?

The Program
A Novel

Dray walked briskly through the kitchen and entry, wiping barbecuesauce on her olive sheriff's-department-issue pants, which she still hadn'thad time to change out of. She pulled open the front door, and the imagehit her like a truck—husky detective in a cheap suit thumbing a boundnotepad, dark Crown Vic idling curbside behind him, partner waiting inthe passenger seat, taking a pass on the advise-next-of-kin.

The detective crowded the door, imposing and cocky, which furtheradded to her disorientation. "Andrea Rackley? Mrs. Tim Rackley?"

Ears ringing, she shook her head hard. "No." She took a step backand leaned on the entry table, displacing a tealight holder that rolled offthe edge, shattering on the tile. "No."

The man's forehead creased. "Are yo u all right, ma' am?"

"I just talked to him. He was in the car, heading home. He was fine."

He lowered his pad, which she saw was not a detective's notepad buta PalmPilot encased in fine leather. Her darting eyes took in that his suitwas not cheap but a fine cashmere, the car was in fact a maroon MercedesS-class, and the partner was not a partner at all but a woman with a wanface, waiting behind like a well-trained dog.

The flood of relief was accompanied by a torrent of sentence frag-ments even she couldn't keep up with. "You don't come to the door of alaw-enforcement family all somber asking for a next-of-kin ID alreadylost someone in the family my God—"

She leaned shakily against the wall, catching her breath. A draft suckedthe doorknob from her grasp. Startled, the man skipped back, lost hisfooting at the step, and spilled backward, landing hard on his affluent ass.

Dray had a split second to note the pain and alarm register in thewide ovals of his eyes before the door slammed shut.

Tim stifled a yawn as he pulled into his cul-de-sac, the starch-stiffsecurity-guard monkey suit itching him at the collar and cuffs. Hisbaton sat heavy on his equipment belt, along with a low-tech portable thesize of a Cracker Jack box, which seemed like a toy company's idea of aradio rather than the thing itself. A big comedown from his belovedSmith & Wesson .357 and the sleek Racals he'd used as a deputy U.S.marshal before his own shitty judgment in the wake of his daughter's violentdeath had forced him from the Service.

Yesterday he'd chased down a teen vandal at the facility where heworked on the northern lip of Simi Valley. The pursuit represented thesecond time he'd broken a sweat in the eleven months he'd been guardingRightWay Steel Company's storage warehouses; the first had beenunglamorously instigated by a roadside-stand enchilada mole he'd injudiciouslywolfed down on a lunch break. Eleven years as an Army Ranger,three kicking in doors with the U.S. Marshals Service warrant squad, andnow he was a locker-room commando with a diminished paycheck. Hiscurrent coworkers got winded bending over to tie their shoes, whichseemed to come undone with such alarming frequency that he'd spentthe majority of the monotonous morning debating whether to volunteerproficiency training on the matter. The old man's groan he'd inadvertentlyemitted while stooping to pick up a dropped key outside WarehouseFive had leached the superiority right out of him, and he'd spentthe afternoon valiantly refraining from doughnuts.

He was reminding himself that he should be grateful for any workwhen movement on his walkway drew his attention. A man stood appraisinghis suit, dusting off the pant legs as if he'd just taken a spill.

Tim accelerated sharply, almost clipping a parked Navigator withtinted windows. He pulled into his driveway and hopped out as the man smoothed his clothes back into place. A woman had climbed out of theMercedes at the curb and was standing meekly at the end of the walk.

Tim approached the man, keeping the woman in his field of vision. "Who are you? Press?"

The man held up his hands as if conceding defeat. He still hadn'tcaught his breath. "I'm here to . . . speak with . . . Tim Rackley. MarshalTannino gave me your address."

The mention of his former boss stopped Tim dead on the lawn. Heand Tannino hadn't spoken for the better part of a year; they'd been veryclose when Tim worked under his supervision, but Tim last saw him inthe midst of a storm of controversy Tim had brought down on himselfand the Service.

The man patted the seat of his pants, wet with runoff from thesprinklers. He glanced at the door nervously. "Truth be told," he said,"I'm a bit afraid of your wife."

The kitchen smelled sharply of burned chicken. Dray had forsaken hercorn on the cob for a three-finger pour of vodka. "I'm sorry. Somethingabout it—the knock, his expression—put me back there, the nightBear came to tell us about Ginny." She set her glass down firmly on thestack of overdue bills a t the counter's edge.

Tim ran his fingers through her hair and let them rest on her shoulders.She leaned into him, face at his neck.

"I thought my heart would just give out there at the door. Good-bye,Andrea, hasta la vista, sayonara, I've fallen and can't get up."

Her voice was raised and, Tim was fairly certain, audible to the couplesitting on the couch one room over.

"He's a friend of the marshal's," Tim said softly. "Let's sit down, seewhat he wants. Deal?"

Dray finished her vodka in a gulp. "Deal."

They shook hands and headed into the living room . . .

The Program
A Novel. Copyright © by Gregg Hurwitz. Reprinted by permission of HarperCollins Publishers, Inc. All rights reserved. Available now wherever books are sold.

Excerpted from The Program by Gregg Hurwitz
All rights reserved by the original copyright owners. Excerpts are provided for display purposes only and may not be reproduced, reprinted or distributed without the written permission of the publisher.