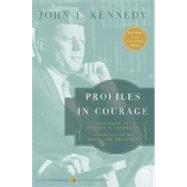 This is a book about that most admirable of human virtues—courage. "Grace under pressure," Ernest Hemingway defined it. And these are the stories of the pressures experienced by eight United States Senators and the grace with which they endured them—the risks to their careers, the unpopularity of their courses, the defamation of their characters, and sometimes, but sadly only sometimes, the vindication of their reputations and their principles.

A nation which has forgotten the quality of courage which in the past has been brought to public life is not as likely to insist upon or reward that quality in its chosen leaders today—and in fact we have forgotten. We may remember how John Quincy Adams became President through the political schemes of Henry Clay, but we have forgotten how, as a young man, he gave up a promising Senatorial career to stand by the nation. We may remember Daniel Webster for his subservience to the National Bank throughout much of his career, but we have forgotten his sacrifice for the national good at the close of that career. We do not remember—and possibly we do not care.

"People don't give a damn," a syndicated columnist told millions of readers not so many years ago, "what the average Senator or Congressman says. The reason they don't care is that they know what you hear in Congress is 99% tripe, ignorance and demagoguery and not to be relied upon . . . "

Earlier a member of the Cabinet had recorded in his diary:

While I am reluctant to believe in the total depravity of the Senate, I place but little dependence on the honesty and truthfulness of a large portion of the Senators. A majority of them are small lights, mentally weak, and wholly unfit to be Senators. Some are vulgar demagogues . . . some are men of wealth who have purchased their position . . . [some are] men of narrow intellect, limited comprehension, and low partisan prejudice . . .

And still earlier a member of the Senate itself told his colleagues that "the confidence of the people is departing from us, owing to our unreasonable delays."

The Senate knows that many Americans today share these sentiments. Senators, we hear, must be politicians—and politicians must be concerned only with winning votes, not with statesmanship or courage. Mothers may still want their favorite sons to grow up to be President, but according to a famous Gallup poll of some years ago, they do not want them to become politicians in the process.

Does this current rash of criticism and disrespect mean the quality of the Senate has declined? Certainly not. For of the three statements quoted above, the first was made in the twentieth century, the second in the nineteenth and the third in the eighteenth (when the first Senate, barely underway, was debating where the Capitol should be located).

Does it mean, then, that the Senate can no longer boast of men of courage?

Walter Lippmann, after nearly half a century of careful observation, rendered in his recent book a harsh judgment both on the politician and the electorate:

With exceptions so rare that they are regarded as miracles and freaks of nature, successful democratic politicians are insecure and intimidated men. They advance politically only as they placate, appease, bribe, seduce, bamboozle, or otherwise manage to manipulate the demanding and threatening elements in their constituencies. The decisive consideration is not whether the proposition is good but whether it is popular—not whether it will work well and prove itself but whether the active talking constituents like it immediately.

I am not so sure, after nearly ten years of living and working in the midst of "successful democratic politicians," that they are all "insecure and intimidated men." I am convinced that the complication of public business and the competition for the public's attention have obscured innumerable acts of political courage—large and small—performed almost daily in the Senate Chamber. I am convinced that the decline—if there has been a decline—has been less in the Senate than in the public's appreciation of the art of politics, of the nature and necessity for compromise and balance, and of the nature of the Senate as a legislative chamber. And, finally, I am convinced that we have criticized those who have followed the crowdand at the same time criticized those who have defied itbecause we have not fully understood the responsibility of a Senator to his constituents or recognized the difficulty facing a politician conscientiously desiring, in Webster's words, "to push [his] skiff from the shore alone" into a hostile and turbulent sea. Perhaps if the American people more fully comprehended the terrible pressures which discourage acts of political courage, which drive a Senator to abandon or subdue his conscience, then they might be less critical of those who take the easier road—and more appreciative of those still able to follow the path of courage.

The first pressure to be mentioned is a form of pressure rarely recognized by the general public. Americans want to be liked—and Senators are no exception. They are by natureand of necessity—social animals. We enjoy the comradeship and approval of our friends and colleagues. We prefer praise to abuse, popularity to contempt. Realizing that the path of the conscientious insurgent must frequently be a lonely one, we are anxious to get along with our fellow legislators, our fellow members of the club, to abide by the clubhouse rules and patterns, not to pursue a unique and independent course which would embarrass or irritate the other members. We realize, moreover, that our influence in the club—and the extent to which we can accomplish our objectives and those of our constituents—are dependent in some measure on the esteem with which we are regarded by other Senators. "The way to get along," I was told when I entered Congress, "is to go along."

Going along means more than just good fellowship—it includes the use of compromise, the sense of things possible. We should not be too hasty in condemning all compromise as bad morals . . .

Profiles in Courage. Copyright © by John Kennedy. Reprinted by permission of HarperCollins Publishers, Inc. All rights reserved. Available now wherever books are sold.

Excerpted from Profiles in Courage by John F. Kennedy
All rights reserved by the original copyright owners. Excerpts are provided for display purposes only and may not be reproduced, reprinted or distributed without the written permission of the publisher.