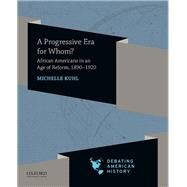 Embracing an argument-based model for teaching history, the Debating American History series encourages students to participate in a contested, evidence-based discourse about the human past. Each book poses a question that historians debate--How democratic is the U.S. Constitution? or Why did Civil War erupt in the United States in 1961?--and provides abundant primary sources so that students can make their own efforts at interpreting the evidence. They can then use that analysis to construct answers to the big question that frames the debate and argue in support of their position.


Michelle Kuhl is Associate Professor of History at the University of Wisconsin Oshkosh.

List of Figures, Tables, and Maps
About the Author
Acknowledgements
Series Introduction

Debating the Question
Did African American leaders Think They Were Making Progress in the Progressive Era?
1.1 Mary Church Terrell, "The Progress of Colored Women"
1.2 Booker T. Washington, "On the Race Problem in America"
1.3 W.E.B. DuBois, "An Appeal to England and Europe"
1.4 Charles Chesnutt Turns Down Du Bois's Appeal