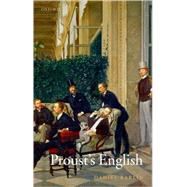 English is the 'second language' of A la recherche du temps perdu. Although much has been written about Proust's debt to English literature, especially Ruskin, Daniel Karlin is the first critic to focus on his knowledge of the language itself - on vocabulary, idiom, and etymology. He uncovers an 'English world' in Proust's work, a world whose social comedy and artistic values reveal surprising connections to some of the novel's central preoccupations with sexuality and art. Anglomanie- the fashion for all things English - has been as powerful a presence in French culture as hostility to perfide Albion; Proust was both subject to its influence, and a brilliant critic of its excesses. French resistance to imported English words remains fierce to this day; but Proust's attitude to this most contentious aspect of Anglo-French relations was marked by his rejection of concepts of national and racial 'purity', and his profound understanding of the necessary 'impurity' of artistic creation.
Daniel Karlin isGraduate Director for the School of English, University of Sheffield.