On the Punitive Society Lectures at the Collège de France, 1972-1973 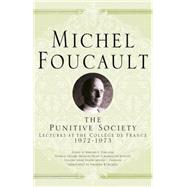 'Unfortunately, when we teach morality, when we study the history of morals, we always analyze the Groundwork of the Metaphysics of Morals and do not read [Colquhoun], this character who is fundamental for our morality. The inventor of the English police, this Glasgow merchant ... settles in London where, in 1792, shipping companies ask him to solve the problem of the superintendence of the docks and the protection of bourgeois wealth. [This is a] basic problem ...; to understand a society's system of morality we have to ask the question: Where is the wealth? The history of morality should be organized entirely by this question of the location and movement of wealth.'
Michel Foucault

These thirteen lectures on the 'punitive society,' delivered at the Collège de France in the first three months of 1973, examine the way in which the relations between justice and truth that govern modern penal law were forged, and question what links them to the emergence of a new punitive regime that still dominates contemporary society.

Presumed to be preparation for Discipline and Punish, published in 1975, in fact the lectures unfold quite differently, going beyond the carceral system and encompassing the whole of capitalist society, at the heart of which is the invention of a particular management of the multiplicity of interweaving illegalisms.

The lectures, which stand as an essay in its own right, bring together hitherto unpublished historical material concerning classical political economy, the Quakers, English 'Dissenters,' and their philanthropy – the discourse of those who introduce the penitentiary into the penal – and the moralization of the worker's time. Through his criticism of Thomas Hobbes, Michel Foucault offers an analysis of civil war that is not the war of all against all, but a 'general matrix' that makes it possible to understand the functioning of the penal strategy, the target of which is less the criminal than the social enemy within. On the Punitive Society is one of the great texts recounting the history of capitalism. Our human sciences prove to be, in the Nietzschean sense, 'moral sciences.'

Michel Foucault, acknowledged as the pre-eminent philosopher of France in the 1970s and 1980s, continues to have enormous impact throughout the world in many disciplines.

Arnold I. Davidson, Series Editor, is the Robert O. Anderson Distinguished Service Professor at the University of Chicago, USA, and Professor of the Philosophy of Cultures at the Università Ca'Foscari, Venice, Italy. He is co-editor of the volume Michel Foucault: Philosophie.