Putins Asymmetric Assault on Democracy in Russia and Europe 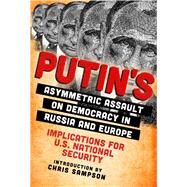 The official U.S. government report on Russian interference in democracy around the world!

Most Americans were surprised to learn of Russian efforts to manipulate the results of the 2016 presidential election, and have become increasingly concerned about the vulnerabilities of our democracy. Here for the first time in an official U.S. government report is the fascinating and detailed account of how ex-KGB agent Vladimir Putin has used computer hackers, official state spy agencies, and even Russian organized crime thugs over the past thirty years to achieve his policy agenda?not only for Russian political domination, but also for his own enrichment and the enrichment of the oligarchs who control almost all aspects of the Russian economy.

This complete report includes chapters on:

Christopher Sampson is an expert in multimedia and terrorist use of cyberspace, and is coauthor of Hacking ISIS: How to Destroy the Cyber Jihad. He maintains the Terrorpedia database of the Terror Asymmetrics Project on Strategy, Tactics, and Radical Ideologies (TAPSTRI) along with spearheading that group’s Terror Counter-Ideology Disrupt and Eliminate project. Sampson has been featured on the BBC as well as numerous radio broadcasts and newspapers.