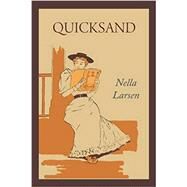 2011 Reprint of 1928 Edition not reproduced with Optical Recognition Software. Nella Larsen's first novel tells the story of Helga Crane, a fictional character loosely based on Larsen's own early life. Crane is the lovely and refined daughter of a Danish mother and a West Indian black father who abandons Helga and her mother soon after Helga is born. Unable to feel comfortable with any of her white-skinned relatives, Helga lives in various places in America and visits Denmark in search of people among whom she feels at home. The work is a superb psychological study of a complicated and appealing woman, Helga Crane, who, like Larsen herself, is the product of a liaison between a black man and a white woman. In one sense, Quicksand might be called an odyssey; however, instead of overcoming a series of obstacles and finally arriving at her native land, Larsen's protagonist has a series of adventures, each of which ends in disappointment.
What is included with this book?