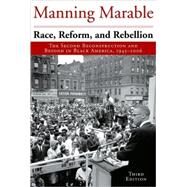 Since its original publication in 1984, Manning Marable'sRace, Reform, and Rebellionhas become widely known as the most crucial political and social history of African Americans since World War II. Aimed at students of contemporary American politics and society and written by one of the most articulate and eloquent authorities on the movement for black freedom, this acclaimed study traces the divergent elements of political, social, and moral reform in nonwhite America since 1945.This updated edition brings Marable's study into the twenty-first century, analyzing the effects of such factors as black neoconservatism, welfare reform, the Million Man March, the mainstreaming of hip-hop culture, 9/11, and Hurricane Katrina. Marable's work, brought into the present, remains one of the most dramatic, well-conceived, and provocative histories of the struggle for African American civil rights and equality.Through the 1950s and 1960s, Marable follows the emergence of a powerful black working class, the successful effort to abolish racial segregation, the outbreak of Black Power, urban rebellion, and the renaissance of Black Nationalism. He explores the increased participation of blacks and other ethnic groups in governmental systems and the white reaction during the period he terms the Second Reconstruction.Race, Reform, and Rebellionillustrates how poverty, illegal drugs, unemployment, and a deteriorating urban infrastructure hammered the African American community in the 1980s and early 1990s.The Third Edition provides: Perspective on recent catastrophic events Context on how 9/11 and Hurricane Katrina magnified persistent racial injustice Analysis of such devastating, long-term trends as urban decay, illegal drug use, and increased poverty An up-to-date text from one of the nation's leading scholarsManning Marable is professor of public affairs, history, political science, and African American studies at Columbia University and is the director of the university's Center for Contemporary Black History. He has written or edited twenty-two books, includingLiving Black History,The Autobiography of Medgar Evers(coedited with Myrlie Evers Williams),Freedom(coauthored with Leith P. Mullings),The Great Wells of Democracy,Black Leadership, andHow Capitalism Underdeveloped Black America.
Manning Marable is professor of public affairs, history, political science, and African American studies at Columbia University
What is included with this book?