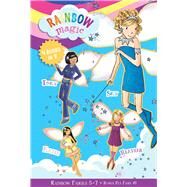 Follow friends Kirsty and Rachel as they rescue the remaining Rainbow Fairies (Sky, Inky, and Heather) in this magical chapter book collection featuring the final books in the best-selling series. Then get a sneak-peek of the Pet Fairies series with book 1: Katie the Kitten Fairy!

Evil Jack Frost has sent the seven Rainbow Fairies far away, and now Fairyland is gray and gloomy. Friends Kirsty and Rachel are off to rescue each Rainbow Fairy so that Fairyland can be bright and colorful again! This chapter book collection includes the final three adventures from the best-selling Rainbow Fairies series (Sky the Blue Fairy, Inky the Indigo Fairy, and Heather the Violet Fairy), plus the first installment in the Pet Fairies series: Katie the Kitten Fairy! Full of illustrations and magic, each book in this compilation includes accessible writing ideal for children just starting to read independently.

Get to know the Rainbow Magic series!
With more than 40 million titles of the Rainbow Magic series sold worldwide, this beloved children’s series is back with a fresh new look and ready for a new audience. Experience the friendship and adventures in Fairyland with these fantastic, introductory illustrated chapter books. This wonderfully engaging series features highly accessible stories, simple language, and black-and-white illustrations, perfect for newly independent readers. A fan favorite for decades, the series has thousands of positive reviews attesting to the fact that the Rainbow Magic series turned their child into a confident and dedicated reader.
What is included with this book?