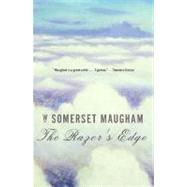 The Great War changed everything and the years following it were tumultuous - most of all for those who lived the war first-hand. Maugham himself is a character in this novel of self-discovery and search for meaning, but the protagonist is a character named Larry. Battered physically and spiritually by the war, Larry's physical wounds heal, but his spirit is changed almost beyond recognition. He leaves his betrothed, the beautiful and devoted Isabel. He studies philosophy and religion in Paris. He lives as a monk. He witnesses the exotic hardships of Spanish life. All of life that he can find - from an Indian Ashrama to labor in a coal mine - becomes Larry's spiritual experiment as he spurns the comfort and privilege of the Roaring '20s. Maugham's theme is the contrast of spiritual content between Larry and the growing materialism and sophistication of those he left behind - and the surprising irony of where both of those paths lead.
W. Somerset Maugham was one the twentieth century’s most popular novelists as well as a celebrated playwright, critic, and short story writer. He was born in Paris but grew up in England and served as a secret agent for the British during World War I. He wrote many novels, including the classics <b>Of Human Bondage, Cakes and Ale, Christmas Holiday, The Moon and Sixpence, Theatre</b><i>, </i>and <b>Up at the Villa</b>.