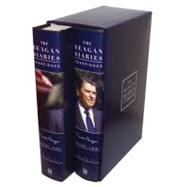 During his two terms as the fortieth president of the United States, Ronald Reagan kept a daily diary in which he recorded, by hand, his innermost thoughts and observations on the extraordinary, the historic, and the routine day-to-day occurrences of his presidency. Now, nearly two decades after he left office, this remarkable record-the only daily presidential diary in American history-is available for the first time. Brought together in one volume and edited by historian Douglas Brinkley, The Reagan Diaries provides a striking insight into one of this nation's most important presidencies and sheds new light on the character of a true American leader. Whether he was in his White House residence study or aboard Air Force One, each night Reagan wrote about the events of his day, which often included his relationships with other world leaders Mikhail Gorbachev, Pope John Paul II, Mohammar al-Qaddafi, and Margaret Thatcher, among others, and the unforgettable moments that defined the era-from his first inauguration to the end of the Cold War, the Iran hostage crisis to John Hinckley Jr.'s assassination attempt. The Reagan Diaries reveals more than just Reagan's political experiences: many entries are concerned with the president's private thoughts and feelings-his love and devotion for Nancy Reagan and their family, his belief in God and the power of prayer. Seldom before has the American public been given access to the unfiltered experiences and opinions of a president in his own words, from Reagan's description of near-drowning at the home of Hollywood friend Claudette Colbert to his determination to fight Fidel Castro at every turn and keep the Caribbean Sea from becoming a "Red Lake." To read these diaries-filled with Reagan's trademark wit, sharp intelligence, and humor-is to gain a unique understanding of one of the most beloved occupants of the Oval Office in our nation's history.
What is included with this book?