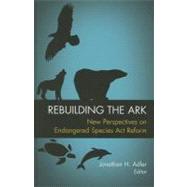 The Endangered Species Act (ESA) may be the most powerful environmental law in the United States. Enacted in 1973, the ESA prohibits any actions that may cause harm to endangered plants and animals or the ecosystems upon which they depend. But although more than 1,200 species are protected under the Act, most remain in peril. The ESA may have saved some species from the brink of extinction, but there is little evidence it is working as intended to recover endangered and threatened species. In some cases, the Act's extensive regulatory requirements may actually discourage conservation efforts.In Rebuilding the Ark: New Perspectives on Endangered Species Act Reform, Jonathan H. Adler leads a group of environmental law experts in evaluating the ESA's successes and failures and exploring multiple avenues for reform. The authors examine methods for incentivizing conservation on private land and water, for revising and standardizing the ESA's regulatory framework, and for increasing transparency, accountability, and public participation in the Fish and Wildlife Service and other conservation agencies. Rebuilding the Ark also considers how the Act should be reformed to address the threat of climate change, and how ESA reform in the United States may affect species conservation overseas.The Endangered Species Act has not been altered for over twenty-five years. Debates over ESA reform are often contentious and hampered by partisan infighting and pressure from interest groups. But reform is crucial if we are to achieve the ESA's ambitious goals and conserve the world's endangered plants and animals. Rebuilding the Ark is a valuable resource for policymakers, conservationists, business owners, and concerned citizens alike.
What is included with this book?