Reform in Soviet Politics: The Lessons of Recent Policies on Land and Water 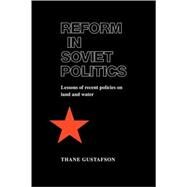 This book examines the record of the Brezhnev regime in its only major domestic innovation: the attempt to modernise Soviet agriculture. Under Brezhnev, the Soviets have invested more than half a trillion dollars in the countryside, but the Kremlin has remarkably little to show for the effort. The reason for the poor return, Gustafson argues is that it is fundamentally flawed because it has been conducted along traditional Soviet lines. For all its innovative features the agricultural programme resembles nothing so much as the Stalinist industrialising campaigns of the fifties. The Soviets cannot afford another such 'reform'. Consequently the agricultural programme cannot stand as a model for meeting the complex problems the Soviets will have to deal with in the next twenty years. Gustafson asserts that whatever solution they devise will depend on whether the Soviet political elite can develop resources and instruments of power more appropriate to the needs of a mature industrial economy. But whether such changes are possible rests on fundamental questions about the essence of power in the Soviet regime.
What is included with this book?