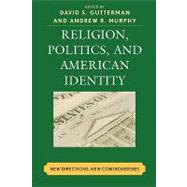 Scholarship on the role of religion in American public life has taken on a new urgency in the increasingly contentious wake of the attacks of September 11, 2001. This volume brings together an impressive group of scholars to build on past work and broaden the scope of this crucial inquiry in two respects by exploring aspects of the religion-politics nexus in the United States that have been neglected in the past, and by examining traditional questions concerning the religious tincture of American political discourse in provocative new ways.
What is included with this book?