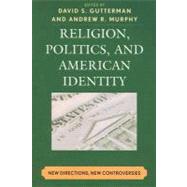 Scholarship on the role of religion in American public life has taken on a new urgency in the increasingly contentious wake of the attacks of September 11, 2001. This volume brings together an impressive group of scholars to build on past work and broaden the scope of this crucial inquiry in two respects: by exploring aspects of the religion-politics nexus in the United States that have been neglected in the past, and by examining traditional questions concerning the religious tincture of American political discourse in provocative new ways. Essays include examinations of religious rhetoric in American political and cultural discourse after September 11th, the impact of religious ideas on environmental ethics, religion and American law beyond the First Amendment, religious responses to questions of gay and lesbian rights, the Church of Jesus Christ of Latter-Day Saints and issues of free speech and public space in Utah, and the role of religious institutions and ideas on the political priorities of African-American and Latino communities. In addition, Religion, Politics, and American Identity includes introductory and concluding essays by leading scholars in the field of religion and politics that assess present and future directions for study.
What is included with this book?