, by Edited by James Hankins 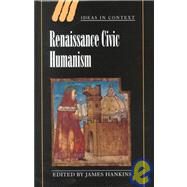 Civic humanism has been one of the most influential of all concepts in the history of ideas. In this volume, an eminent team of political theorists and historians of ideas have been brought together to reassess the impact on the subject of the pioneering work of Hans Baron (1966) and J. G. A. Pocock (1975), creating a fresh intellectual landscape in which Renaissance civic humanism can be discussed. Drawing on a wide range of political and historical texts, this book evaluates civic humanism in the light of the emergence of oligarchy, imperialism, patronage politics and the Medici ascendency in Florence in the 14th to 16th centuries. It proposes new understandings of the evolution of important republican concepts such as liberty, the rule of law, virtue, and the common good. This thought-provoking collection represents a significant contribution to the study of republican political ideology in the Renaissance and modern periods.
What is included with this book?