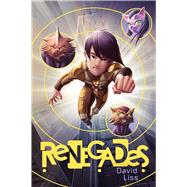 Science fiction super fan Zeke is back in action as he and his friends work to finally take down the evil Phands in this hilarious and exciting conclusion to the Randoms series.

Zeke has returned to Earth and, as usual, nothing is going like he planned.

The plan was: escape from Junup, rescue Director Ghli Wixxix and Captain Qwlessl, stop the Phands, and finally get Tamret to officially be his girlfriend. Instead, he gets stuck in an Earth facility for disobedient children, is stranded on an unknown and supposedly deserted planet with Villainic, of all beings, and Tamret kind of broke up with him. He’s not entirely sure. Nothing and no one is as it seems, and all Zeke knows is that he’s tired of the Phands trying to take over the galaxy.

With Smelly gone and his friends scattered, though, it’s going to take a lot more than Zeke’s expert sci-fi knowledge to save them this time.
David Liss is a proud science fiction geek. When not acting like a total fanboy, he’s generally working on his books, stories, and comics. Liss has written eight bestselling novels for adults, most recently The Day of Atonement, and is the author of numerous comics, including Mystery Men, Sherlock Holmes: Moriarty Lives, and Angelica Tomorrow. He lives in San Antonio, Texas.