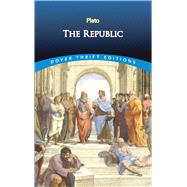 Famous philosophical treatise of the 4th century BC concerns itself chiefly with the idea of justice, as well as such Platonic theories as that of ideas, the criticism of poetry, and the philosopher's role. Source of the famous cave myth and prototype for other imaginary commonwealths, including those of Cicero, St. Augustine, and More. Benjamin Jowett translation.

Plato ranks among the most familiar ancient philosophers, along with his teacher, Socrates, and his student, Aristotle. In addition to writing philosophical dialogues — used to teach logic, ethics, rhetoric, religion, and mathematics as well as philosophy — he founded Athens' Academy, the Western world's first institution of higher learning.