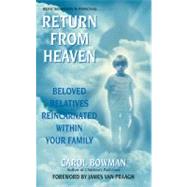 What if you could see a loved one who has died, not in a future spiritual realm, but here and now, in this lifetime?It is possible, says Carol Bowman, author of Children's Past Lives and a pioneer in reincarnation studies. Based on in-depth research and direct observation of very young children, she shows in this groundbreaking book how common it is for beloved relatives to reincarnate into the same family. Typical families share how their children -- some as young as two and still in diapers -- speak spontaneously of intimate details from the lives of a family member they never knew. These true stories shed new light on age-old questions of family relationships: Do we choose our parents? What relationships survive death? What happens to the soul after a miscarriage or abortion? Bowman offers hope for anyone who has lost a beloved relative and longs to be reunited again.
Return From Heaven
Beloved Relatives Reincarnated Within Your Family

Dylan was only two years old when his mother, Anne, first noticed his strange behavior. One fall evening as the light was dimming, he was in the hallway happily playing on the floor with his toys. Anne was in the kitchen making dinner when she heard him say distinctly, "I smoke too." She was surprised by this odd remark'not the usual play babble -- and peeked over at Dylan, who was holding his fingers together, putting them to his lips, and withdrawing them, exactly as if he were taking a drag from a cigarette. Dylan repeated, "I smoke too." And before Anne could say anything to him, he looked over at her, patted his front pants pocket, and said, "I keep my smokes here." This puzzled her because no one in the family smoked. She couldn't think of anyone Dylan could be imitating.

Another odd thing happened shortly after that. Again it was around dinnertime when Anne was busy cooking and Dylan was playing on the floor in the hallway. He was playing with his "pogs," small cardboard disks that children like to collect. Dylan caught her attention when he blurted out, "Sevens! I'm throwing sevens!" He was on his knees, throwing the pogs like dice with a sidewise sweep of his wrist and then thrusting his little hands triumphantly into the air. He again exclaimed, "Sevens! I'm throwing sevens!"

She shook her head in puzzlement. Where did he get this? She was quite sure he had never seen anyone gamble or shoot craps in his short life. He was only two and she knew that the only TV he saw was Sesame Street and Barney. As most busy parents would, she filed this incident away in her mind, along with the one about the smokes, as a curiosity, one of the many surprises kids are prone to come up with.

But a few months later Dylan developed an extreme behavior that was not so easy to dismiss. On his third birthday someone gave him a toy gun, and from that point on he insisted on having it with him at all times. If he lost it or somebody took it away, he would throw a hysterical fit. He slept with the gun, took a bath with it, kept it in the waistband of his pants, and even tucked it into his bathing trunks at the swimming pool. It wasn't one particular toy gun he was attached to'any toy gun would do. Whenever he left the house, he had to make sure he had his gun with him. If he found he had forgotten it, he would scream until he was given another one. Once, when Dylan was taken to a funeral, he realized too late that he had forgotten it. He cried so hard it caused him to wheeze and cough. He was making such a commotion his parents had to remove him to the car. It took him a long time to settle down enough so they could drive home.

After the funeral incident, everyone in the family stashed toy guns -- in their purses, in their homes, and even in the glove compartments of their vehicles -- to avoid Dylan's hysterical scenes. When he turned five and was about to start school, his obsession caused real concern. The only way his mother could convince him not to take his gun with him was to tell him it was against the law to have a gun in school. Reluctantly, he obeyed.

I first heard the story of Dylan from his aunt Jenny, Anne's sister-in-law, whom I met for the first time at a party. Jenny had just finished reading my book, Children's Past Lives,and was eager to talk to me about her now five-year-old nephew, who she was beginning to believe was the reincarnation of her grandfather. She explained that she had long been open to the possibility of reincarnation, but she hadn't known that it was possible for a child to be the reincarnation of a family member. Now Dylan's strange behaviors were beginning to make sense to her. She continues the story.

Our whole family dismissed Dylan's behaviors as just amusing little things he did. We laughed about it. Nobody stopped to think there might be a cause, but by the time I finished reading your book, everything fell into place.My grandfather, who we called Pop-Pop, was a beat cop in Philadelphia during the Depression. Later he was a prison guard. He always carried a gun with him, always had a gun in his house, and always slept with a gun beside his bed. Always.

During the last three years of his life, Pop-Pop was very sick. He had been a chain-smoker all his life and was slowly dying of emphysema and heart disease. Even during his terrible illness, when he could barely breathe, he continued to smoke. In fact, the last words we heard from him as they carried him out on a stretcher were to ask for a cigarette. He died on the way to the hospital.The strange thing is that Pop-Pop carried his cigarettes in his pants pocket just as Dylan pretended to do. Most people carry cigarettes in a breast pocket so they won't get crushed. But not Pop-Pop. And Pop-Pop loved gambling -- especially dice. During the Depression he and his buddies would shoot craps behind abandoned buildings every chance they got.

After I started piecing all of this together -- Dylan imitating smoking and shooting craps'I asked my mother (Pop-Pop's daughter) about Pop-Pop's last days. She told me something I hadn't heard before. One day while Pop-Pop was napping, my grandmother was cleaning the house and found Pop-Pop's gun hidden under the sofa cushion in the living room. He had moved it from its usual place on the night table. This really scared her because she was afraid that he was going to use the gun on himself to end his suffering. She called her son, who came and took the gun and threw it into the river. When Pop-Pop found out what had happened, he was furious that his gun had been taken away. I don't think he ever got over it.

Return From Heaven
Beloved Relatives Reincarnated Within Your Family. Copyright © by Carol Bowman. Reprinted by permission of HarperCollins Publishers, Inc. All rights reserved. Available now wherever books are sold.

Excerpted from Return from Heaven: Beloved Relatives Reincarnated Within Your Family by Carol Bowman
All rights reserved by the original copyright owners. Excerpts are provided for display purposes only and may not be reproduced, reprinted or distributed without the written permission of the publisher.