Revelry, Rivalry, and Longing for the Goddesses of Bengal 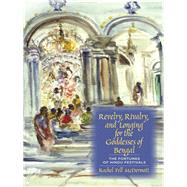 Annually during the months of autumn, Bengal hosts three interlinked festivals to honor its most important goddesses: Durga, Kali, and Jagaddhatri. While each of these deities possesses a distinct iconography, myth, and character, they are all martial. Durga, Kali, and Jagaddhatri often demand blood sacrifice as part of their worship and offer material and spiritual benefits to their votaries. Richly represented in straw, clay, paint, and decoration, they are similarly displayed in elaborately festooned temples, thronged by thousands of admirers. The first book to recount the history of these festivals and their revelry, rivalry, and nostalgic power, this volume is an unprecedented achievement, tracing the fascinating development of a major public event. Rachel Fell McDermott describes the festivals' origins and their growth under British rule. She maps their iconographic conventions and carnivalesque qualities and their relationship to the fierce, Tantric sides of ritual practice. She confronts controversies over the tradition of blood sacrifice and the status-seekers who compete for symbolic capital. Expanding her narrative, she takes readers beyond Bengal's borders, watching the transformation of the goddesses and their festivals across the world. McDermott's work underscores the role of holidays in cultural memory, specifically the evocation for Bengalis of an ideal, culturally rich past. Under the thrall of the goddess, the social, political, economic, and religious identity of Bengalis takes shape.
Rachel Fell McDermott is professor of Asian and Middle Eastern Cultures at Barnard College. Her books include Singing to the Goddess: Poems to Kali and Uma from Bengal and Encountering Kali: In the Margins, at the Center, in the West.
What is included with this book?