Revolution at the Gates Zizek on Lenin: The 1917 Writings 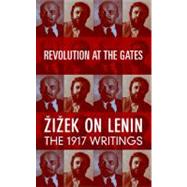 The idea of a Lenin renaissance might well provoke an outburst of sarcastic laughter. Marx is OK, but Lenin? Doesn#x19;t he stand for the big catastrophe which left its mark on the entire twentieth-century? Lenin, however, deserves wider consideration than this, and his writings of 1917 are testament to a formidable political figure. They reveal his ability to grasp the significance of an extraordinary moment in history. Everything is here, from Lenin-the-ingenious-revolutionary-strategist to Lenin-of-the-enacted-utopia. To use Kierkegaard#x19;s phrase, what we can glimpse in these writings is Lenin-in-becoming: not yet Lenin-the-Soviet-institution, but Lenin thrown into an open, contingent situation. In Revolution at the Gates, Slavoj Zizek locates the 1917 writings in their historical context, while his Afterword tackles the key question of whether Lenin can be reinvented in our era of #x1C;cultural capitalism.#x1D; Zizek is convinced that, whatever the discussion #x13; the forthcoming crisis of capitalism, the possibility of a redemptive violence, the falsity of liberal tolerance #x13; Lenin's time has come again.
Slavoj Žižek is a Slovenian philosopher and cultural critic. He is a professor at the European Graduate School, International Director of the Birkbeck Institute for the Humanities, Birkbeck College, University of London, and a senior researcher at the Institute of Sociology, University of Ljubljana, Slovenia. His books include Living in the End Times, First as Tragedy, Then as Farce, In Defense of Lost Causes, four volumes of the Essential Žižek, and many more.
What is included with this book?